The NOVA - A Harley Davidson which was never born

So have you ever heard of the Harley Davidson NOVA ? Although HD are known to produce stylish lazy ‘Life Style’ bikes, its not very famous...

big-diesel.blogspot.com
► Show Full Signature
THE BEST BIKE ...is the one you're on!!!

Big_gary said:
Where did you find that picture at ? I wonder why it never came out .
Click to expand... 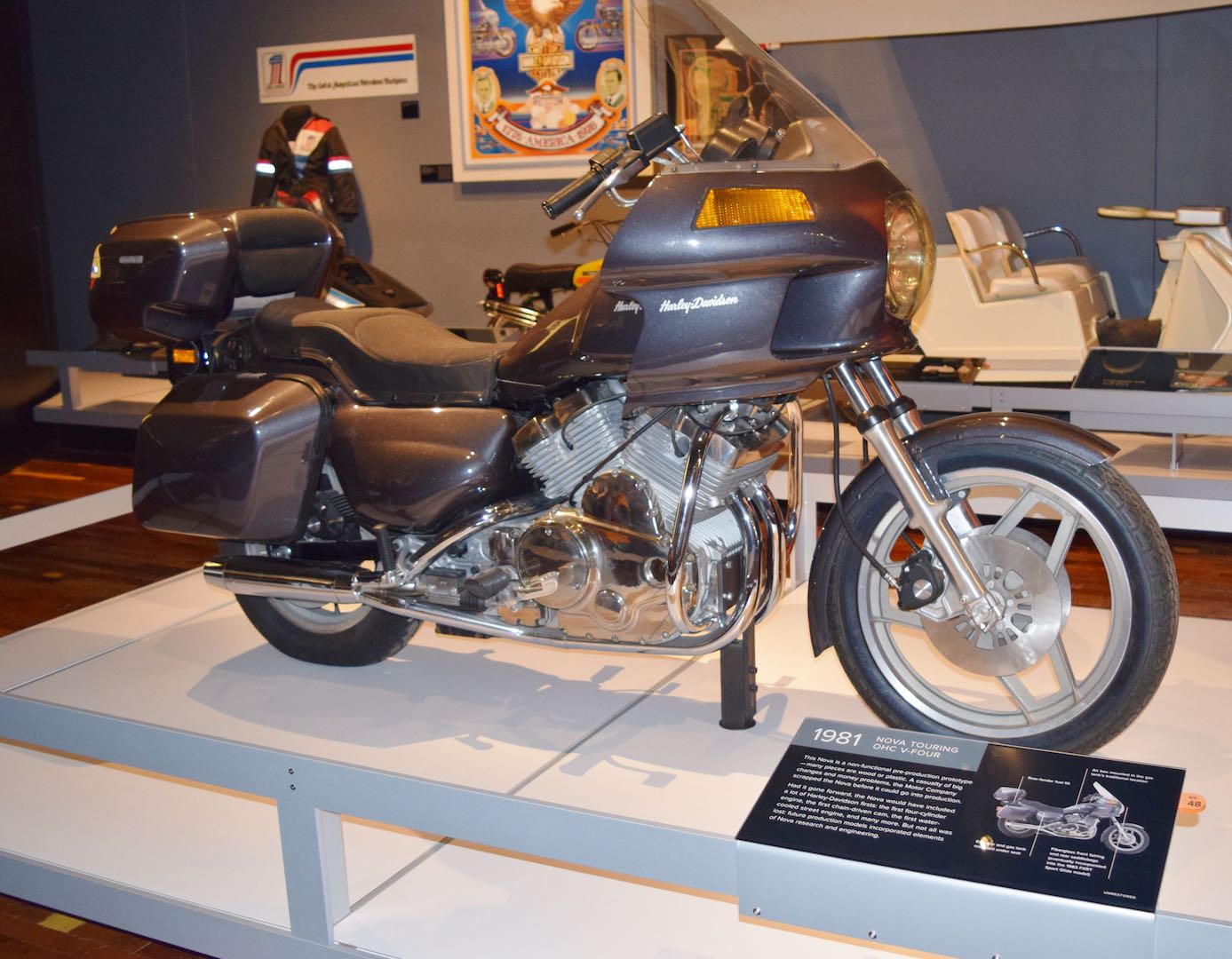 Harley-Davidson Project Nova | A Look at What Might Have Been

Project Nova, begun in 1976 (AMF years), involved by far the boldest innovations in Harley-Davidson product design history any time before or since.

Joined Jan 7, 2014
·
1,991 Posts
That would have probably ended up being a classic touring motor once it was fitted into an FL. But in the end, all we got was the sorry assed clutch.
► Show Full Signature

Joined Mar 26, 2014
·
1,123 Posts
They really shot themselves in the foot by not following through with that. Offering that alongside the Evo would have been a big deal.
► Show Full Signature
'05 Night Train, '16 Road Glide Ultra

Joined May 6, 2012
·
591 Posts
We can only imagine where the Motor Company would be, had they continued down that road. I sure wouldn't pass on an opportunity to ride a working model of that bike, if that were possible.
► Show Full Signature
2012 FLTRX, vivid black
"The opposite of more is enough"

Sent from my iPhone using Tapatalk

sometimer said:
We can only imagine where the Motor Company would be, had they continued down that road. I sure wouldn't pass on an opportunity to ride a working model of that bike, if that were possible.
Click to expand...

I think it would have killed the MoCo. If people wanted a Jap bike then they would buy a Jap bike. Their reliability was far better than H-D back then. H-D recovered, with the Evo, on an image and a sound. Could you imagine Sturgis with 100,000 rice burners? That's like a transvestite stripper in my opinion.

Joined Aug 27, 2018
·
82 Posts
Take a ride on a Live Wire. The Lakeland FL Dealership has a lonely Live Wire sitting out front, nobody wants to ride it.
I noticed the lack of a clutch lever right off, and since it doesn't shift - none is needed.
The good news is - young kids who can't shift gears can ride a ($30,000) motorcycle.

'05Train said:
They really shot themselves in the foot by not following through with that. Offering that alongside the Evo would have been a big deal.
Click to expand...

Harley Davidson couldn't afford it. When HD bought the company back from AMF, HD had to make a decision to go with the Evolution or V4. There wasn't enough money left to support both engines, so the Evolution won out.

Joined Jan 7, 2014
·
1,991 Posts
The motor and scooter built around it were ready to go into production, AMF just needed to write a check to set the tooling up. And it was going to be a big check. But before it was written, AMF had a leadership change. The new management was in no way as enthusiastic about motorcycles and toys in general as the previous had been. Fact is, by the late 70's AMF was on the ropes. They began shedding assets, including Harley in 81. And by 85 they became one of the largest corporations to fall victim to raiders. Minstar ate them in a hostile takeover then gutted the company for quick cash.

So that left the new Harley with some designs and a few prototypes, and no money. They also had the EPA about two feet up their asses, and a list of new regulations the shovel head would have trouble meeting. But While AMF had been developing the Nova, they had also been working on keeping the shovel viable. So they also handed the new Harley a pretty much complete set of plans and prototypes for the Evo. Which at its inception still used more than a few off the shelf shovel parts and 95 percent of the tooling. They went with the Evo, not because it was better, but because they had no choice. And by the time they had enough money to choose, the Nova was out of date. But a if you look at a VRod, and then look at the Nova, you'll know where the VRod motor came from.

Had AMF kept Harley and built the Nova, I think it would have been a successful scooter. Certainty more competitive than the FL against the early Wings. There was also a 2 cylinder version that would have gone in the lighter scooters as was as a six cylinder that was just on paper. All modular with interchangeable parts. But the way AMF was going down hill at the time, Harley would have probably gone down with them. And seeing as AMF was takeover fodder just a few years later, they may have have been unable to fund the Nova had they kept Harley.

To dream a little, just imagine a V6 wet motor in a fixed fairing scooter, in about 1983 or 84. Because that was the plan. That would have really been something.
► Show Full Signature

Joined Jul 18, 2018
·
244 Posts
IMO, I don't think it would been the right direction. Nothing to set it apart from the competition, not talking about performance, but blending in with rest(Honda, Kawasaki, etc). The classic styling and sound of a Harley has kept them afloat. Not to say anything wrong with a new parallel line, like this and the V-Rod, just didn't have the staying power. Still think they could come out with a new liquid version that would keep the appeal and yield EPA friendly higher hp numbers. Just have to be creative with eye pleasing radiator.
► Show Full Signature
2018 Road Glide Special

Little Wing said:
one of the first (if not the first) venture with Porsche

The NOVA - A Harley Davidson which was never born

So have you ever heard of the Harley Davidson NOVA ? Although HD are known to produce stylish lazy ‘Life Style’ bikes, its not very famous...

Never heard of this!!!! Thanks for the link Denny. Just from what I saw and read; IMHO, HD screwed the pooch on that one. I would have bought one!! Was always fond of the KZ650 custom and this reminds me of the KZ. @snarley53 thanks for starting this thread; VERY INTERESTING READING.
► Show Full Signature
Let us hear the conclusion of the whole matter: Fear God, and keep his commandments: for this is the whole duty of man. (Ecclesiastes 12:13)

Joined Jul 11, 2015
·
2,306 Posts
A lot of interesting, & SOLID, points of view; but that's one of the GREAT things about this forum and the peeps on it
► Show Full Signature
Let us hear the conclusion of the whole matter: Fear God, and keep his commandments: for this is the whole duty of man. (Ecclesiastes 12:13)

Like this?
► Show Full Signature
"I'd rather have a bottle in front of me, than have to have a frontal lobotomy." ~ Tom Waits

You have no idea how happy it makes me when someone actually gets my WAY off base & obscure, moment in time references......like you just did.......come 'ere and give us a Hug Son !!!
► Show Full Signature
- Just Because I Wander Means Not That I am Lost -
1 - 19 of 19 Posts
Join the discussion
Continue with Facebook
Continue with Google
or sign up with email
Recommended Reading
Read More
Read More
About this Discussion
18 Replies
15 Participants
Last post:
SteadyEddie 3 d ago
Road Glide
A forum community dedicated to all Harley-Davidson Road Glide owners and enthusiasts. Come join the discussion about performance, builds, accessories, mods,specs, troubleshooting, maintenance, and more!
Full Forum Listing
Explore Our Forums
*General Road Glide Discussions/Pictures New Members Welcome Area General Off-Topic Discussions Audio Controls & Handlebars
Popular Communities