First out of State Trip Texas to Florida

2010 FLTRX, 96 No Mo, Plain Jane
Joined Jun 13, 2014
·
903 Posts
I made the ride from Galveston to Daytona, but we rode non-stop, as we were heading to my son's wedding. Parts of I-10 going through Louisiana, are ball busters, teeth rattling, and the bike shows you that.
It is also common fact, that Louisiana likes to pull over Texas plates, so don't make any mistakes while riding through Louisiana. Also when entering the state of Florida, Keep Your Eye in the Sky, cause they use airplanes to track speed. The lines you see across the highway, are used for timing.
2 wheel is an expert traveler, so his advice is rock solid. Taking notes from him, will serve you well, and it all starts by taking pictures along the way.
Enjoy your trip!!

micmoren said:
Went from El Paso to Biloxi and a short side trip to Pensacola in 2020. When you cross into Louisiana, in Lake Charles, stop at the HD dealer, oldest in LouisIan’s. Keep going to Lafayette. There take hwy 90 to the Tabasco factory, very cool place. Go back to 90 and ride that Mississippi, great ride along the gulf. At Bay St. Louis take a pit stop at the Blind Tiger bar and grill. Then back on 90 to Biloxi.
Click to expand...

Heck yeah! Thank you this is stuff that I was looking for! Really Appreciate the info!

twowheeladdict said:
Welcome. This is the route I would take from Biloxi, MS to Tallahassee. If you like experiences, this route has you taking a small barge ferry across Mobile Bay, Runs you along the white sugar sand beach between Pensacola and Navarre Beach, Crosses the Mid-Bay Bridge from Destin, FL to Niceville, FL, and runs along the north side of the Choctawhatchee Bay on your way to Tallahassee. 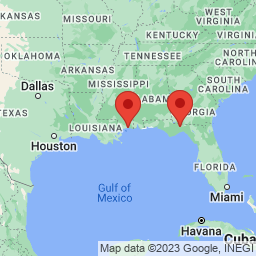 Killer bike! Thank you for the info, looks like you had a great trip and it looks like exactly what I was looking for!

FLTRXS20 said:
Welcome, very good info already stated. As noted, ensure you have your rain gear handy at all times. That is the start of the rainy season in FL. It may rain for a few, an hour or so or not at all.

Ill need to get some rain gear, that was is a concern heading into the gulf in mid March. Luckily have not been stranded in Texas as of yet in the rain.

Rob-B said:
The route you are taking is historically Republic of West Florida.
When Spain owned the Gulf of Mexico States, that area extended to Lake Pontchartrain Louisiana.
When the Florida Republics incorporated into the United States, both MS and AL had no seaports.
This is where Mobile and Biloxi departed West Florida. They notched off seaports for those two States.

Forts abound in Florida. Below Ft Walton are Ft White, Ft Myers, Ft Lauderdale, Ft Meade - all of these were involved in the Indian Wars that were not US Army ventures.

en.wikipedia.org
The Florida Settlement Act ended the Indian Wars by granting land to immigrant families willing to fight it. My wife's family were settlers here that fought in that war. Ft Blount was so named for her folks.
The end results - the above Forts could receive provisions without the wagons being raided.
Flagler built a railway and Northerners began traveling here in winter months in the same trains that delivered their citrus.

Keep history in mind - Florida has a lot of it.
Click to expand...

Thanks for the history lesson! I was born in FL, but moved to TX right after. It always feels good getting back.

twowheeladdict said:
@louisiana rgl, sometimes my routes are out of the way and the photos help entice people to why I ride those roads. LOL!

@KyleCuenco, it looks like your route will take you through Lake Charles, LA. If you like, or want to try some Cajun food, Steamboat Bills is conveniently located right off I-10. SteamBoat Bill's Seafood Restaurant
When I went through there the first time I had to order everything on the menu that was new to me.
View attachment 435721
View attachment 435722
What we have here is

That looks like a great hang. A bunch of folks suggested Lake Charles, so it looks like I need to add some time for a stop there! Thanks!

smitty901 said:
I have one wife has one. Putting one in a bag with battery out is also an option. It has never been an issue for us but just a safe guard having it.
Click to expand...

Thats a great recommendation. I think HD cut the cost of 19s and 20s by only giving one FOB for each bike... Thanks for the tip!

twowheeladdict said:
Here I am riding east out of El Paso. Photo taken at border patrol check point. Just accentuated my southern accent and they let me through. Polarized sunglasses and drop down sunshield.
View attachment 435732
Click to expand...

This is a pro move! I have a drop down on my helmet, Wouldn't have thought about that at all.

2020 Limited.
Joined Apr 12, 2015
·
462 Posts
Do multiple 300 mile days around your house to get acclimated before your trip especially if with Significant Other.
Phone and Phone charger, a contact to advise location daily.
Rain Gear
Advils etc before you need them
I just keep a spare fob battery in glove box and replace the one in the fob before any major trip.
If you have time drop South out of Lake Charles on 14 over to 90 towards Houma and enjoy the Cajun Country then stay on 90 into and out out of New Orleans to the MS Coast and beyond lots of good eats along the way.
If you run the Gulf Shores rout from the bay ferry don't forget to make it to FlorBama bar.
Ride your Ride not anyone elses. and have a good time.

2021 Bronze Armour CVO
Joined 21 d ago
·
15 Posts
Grab some electrical tape and store it in your saddle bag. Roll out three lengths and run along the top of your visor (think advertising banner on your visor). Two strips may be a enough, I always run a third, this will eliminate the need to ride one handed with the sun into your eyes.
Sunglasses or drop down sun visor can still be used. This tip just adds a physical block for the sun, that isn’t your hand and is easy to do.

2010 FLTRX, 96 No Mo, Plain Jane
Joined Jun 13, 2014
·
903 Posts
There are times that I miss Florida, both my sons born in Daytona and my daughter born in Jacksonville, I went down to Daytona for spring break and never went home, stayed down there for 15 years, till the IRS caught up with me, then I had no choice but to move back to Texas, if it weren't for Galveston or Port Aransas, I probably would have moved back to Florida by now..........not!!!