After riding my 2008 Nightster for a year and doing multiple trips with my wifeand I on it I decided its time to get a bagger. After talking with MANY dealers and other bagger owners I decided to go with the Road Glide.

I looked at many different ones but most of them were WAY to high mileage for what I was looking for. After looking at a 2009 RG FLTR and the salesman just ignoring everthing I said I hopped on the net and found this one. Went and looked at it heard it run and struck the deal. They had 16999 on it and. Got them to 13870.

Pics when I got it:


Ill get current pics as soon as it gets nice again haha
► Show Full Signature
'07 Pewter Pearl
Road Glide or No Ride!

Joined Apr 20, 2013
·
672 Posts
Thanks Bob, my inability to leave anything the way it is already kills my bank account lol.
► Show Full Signature
'07 Pewter Pearl
Road Glide or No Ride! 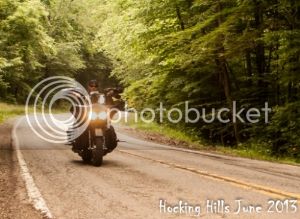 Joined Aug 6, 2012
·
428 Posts
Here is one more for you in case you are wondering what Sancho Wings would look like.

Shark of the Month August 13

caboverbob said:
Careful V, if you spend too much time on here it WILL cost a lot. I blame these guys for most of my winter spending spree !

Joined Apr 20, 2013
·
672 Posts
02Heritage, yea I like and have been thinking about painting the inner fairing. Your pic has pushed me to do it. I am worried if I went 18 front and rear that the height of the bike would look goofy. I want to use monotubes up front to drop it and inch when I install the wheels on this.

I finally did the apes and can say the make the biggest of differences. The comfortability is amazing and there's still complete control and handling.

Joined Aug 6, 2012
·
428 Posts
I am only running the 18" on the front. Stayed with the 16 inch in the rear, although I did match. I did not lower the front but sometimes wondered if I should have. I am looking for a rear fender now myself.
► Show Full Signature
2012 Maple CVO

Joined Apr 20, 2013
·
672 Posts
Oh ok that's what I'm wanting to do but want to bring it down a little. I like the slammed look on these bikes. I'm looking into adding some type of skirt to lengthen the stock fender since we don't get the fancy schmancy lighted skirt haha
► Show Full Signature
'07 Pewter Pearl
Road Glide or No Ride!

Joined Apr 20, 2013
·
672 Posts
Welp decided it was time to finish the lighting up. I got tired of the fugly red taillight lens sticking out like a sore thumb so I bought the smoked kuryakyn taillight and installed it. ive gotten several compliments on it now and i love it.

Joined Apr 20, 2013
·
672 Posts
So I have the part numbers for all the parts to install the tri bar rear fascia so I'm going to order that soon and get it on. Will make the rear of the bike more attractive along with the 150 rear tire I'm going to do.
► Show Full Signature
'07 Pewter Pearl
Road Glide or No Ride!

Joined Apr 20, 2013
·
672 Posts
That time of year again. Maintenance and upgrades. Shopped a little for the first wave and did a little visual upgrade

Joined Apr 20, 2013
·
672 Posts
Pulled the Inner fairing off and disassembled it to get it cleaned and prepped for paint. Riding seasons done here anyways so what better time.

Joined Jun 30, 2011
·
2,084 Posts
Haven't seen many Road Glides in pewter before. You got it looking great!
► Show Full Signature
Blessings, Zinc -
"But when I leave I want to go out like Elijah, with a whirlwind to fuel my chariot of fire." Rich Mullins