Stoic Joker said:
The typical Weisco "high compression" piston kit for a Shovelhead is only 9:1, and is quite manageable (e.g. no starting issues or other ill behavior). I had a set in my 82 FLT that I rode to work daily back then, and it was stone axe reliable. I wouldn't worry about that one a bit.
Click to expand...

RoadGlideRider said:
Almost every year has something unique that can cause problems.
Most don’t know the FXR Shovelhead didn’t have a belt final drive. It was I closed chain. Parts are hard to find. But working on the top end was easy, still in the frame. The frame was designed for the EVO so I could take the front head off without removitvng the fuel tank.
Click to expand...

I've read that about the 82,83 fxr having a closed in chaiin but never seen one, only flt's. I'm not sure all of them had it.

I think , going by memory here , the Sturgis was the first belt final drive in the modern era , and I believe it had belt primary ..

The FXR bible that I recently published says that certain models did. I personally never seen one or thought they did either.

Check out this 1954 Harley-Davidson HYDRA GLIDE listing in Stone Mountain, GA 30083 on Cycletrader.com. It is a Classic / Vintage Motorcycle and is for sale at $16000.

Sent from my SM-N970U using Tapatalk

I think , going by memory here , the Sturgis was the first belt final drive in the modern era , and I believe it had belt primary ..

And the 1984 FLH Electra Glide with a 4 speed transmission had a belt final drive belt.

Big_gary said:
I've read that about the 82,83 fxr having a closed in chaiin but never seen one, only flt's. I'm not sure all of them had it.
Click to expand...

Big_gary said:
The FXR bible that I recently published says that certain models did. I personally never seen one or thought they did either.
Click to expand...

RoadGlideRider said:
And the 1984 FLH Electra Glide with a 4 speed transmission had a belt final drive belt.

My 82 RS was equipped with a rear chain oiler. Don't see the need for that if it had an oil bath. Like I said earlier, I think only certain models of the FXR had the oil bath for the rear chain.

RoadGlideRider said:
And the 1984 FLH Electra Glide with a 4 speed transmission had a belt final drive belt.

JacktheBagger said:
And there is a weird one , my 84 EVO had the enclosed chain ..

One thing is for sure back then, HD didn't want old parts laying around so the used them up.
The FXR bible said the FXR police bikes in 84 were still Shovel.

Joined Apr 18, 2010
·
10,359 Posts
My EVO had the EVO cases and primary and a buddy had an EVO with the shovel bottom end and cases , his looked really weird since the cylinders were so much larger ...

But ya know the EVO as I recall was a mid year intro , so I believe there were some 84 Shovels ..

Another plus for “old scoots”! Not that I actually know a lot about em; my first HD was an ‘85 Iron Head Sporty. Most depending piece of transportation that I’ve ever owned and a blast to ride!

Joined Nov 1, 2017
·
1,578 Posts
@JacktheBagger why don't you build exactly what you want?
prolly be cheaper, with modern, more reliable parts.
sometimes "The Glory Days" hide all the problems with keeping those old scooters running.
and you can call it yours forever!
U

Check out this 1954 Harley-Davidson HYDRA GLIDE listing in Stone Mountain, GA 30083 on Cycletrader.com. It is a Classic / Vintage Motorcycle and is for sale at $16000.

I call that a 'tweener". Too many re-pop parts to be investment grade, but too nice to turn into a bobber/chopper ... somewhere in between.
U

twowheeladdict said:
Saw this on the Moto Guzzi Forum.
Click to expand...

Great looking home built chop. If I ever own something like this it probably means I've sold the Glide and just want a lighter more fun every day around town ride. That means I'd definitely want a front disk brake on it, conventional clutch/shifter set up, apes, and upturned fishtail exhaust. Unfortunately that still leaves a hardtail that would kill my back ... hence my question on another thread about the affect of an airbag suspended seat that I've seen used on some custom chopers.
U

Big_gary said:
The FXR bible that I recently published says that certain models did. I personally never seen one or thought they did either.
Click to expand...

BG - Did you mean to say "purchased", or are you an author now?!

RoadGlideRider said:
And the 1984 FLH Electra Glide with a 4 speed transmission had a belt final drive belt.
I had a 1982 FXR. It had the enclosed chain. Finding parts for it was very hard. My research says the inclosed chain was Used on the Shovelhead FXRs from 1980 to 1983.
Click to expand...

1980 FXB Sturgis was indeed the first (modern-ish) Harley with primary belt. Others to have that short-lived feature were the 1981 and 1982 FXB, the 1983 FXDG (''Twin Belt Wide Glide'', the limited edition custom designed and personally overseen by Willie G..just 810 made, a mate of mine has a museum quality one of those just up the road from me here in Melbourne, Australia) , and seemingly random examples of the 1983 and 1984 FXSB, the shortlived designation for the final Shovel Low Rider with final belt drive.

By 1984 and into 1985 as Jack said above there was a definite mix and match of parts as H-D used up the Shovelhead inventory. This included a limited range of 4-speed kickstart Evos with Shovelhead EVERYTHING except the actual motor; a 1984 Shovelhead FXEF with the twin tanks, but never actually featuring in the full model-line-up brochures for that year; the first half-year production of 1984 FXST Evo Softails (the amazing new hardtail-lookalike which saved the MoCo) actually had the Shovelhead ''dry'' clutch; and so on and so on.

The last Shovelheads? For 1984 plenty remained in the line-up, but all FXRs and FLTs were Evos. The very final Shovels were actually titled 1985, all FLHPs. Aka FLH Police. Some 300 were made to fulfil police contracts signed in 1984, and had to fulfil the spec in those contracts. Willie G went down to the production line to pose for photos with these last Shovelhead engines....and there is an image of him with both Shovel and Evo motors in the plant. Whenever someone argues that ''1985 Shovels'' are bulltish, I always refer to this picture...look closely at the tag....... 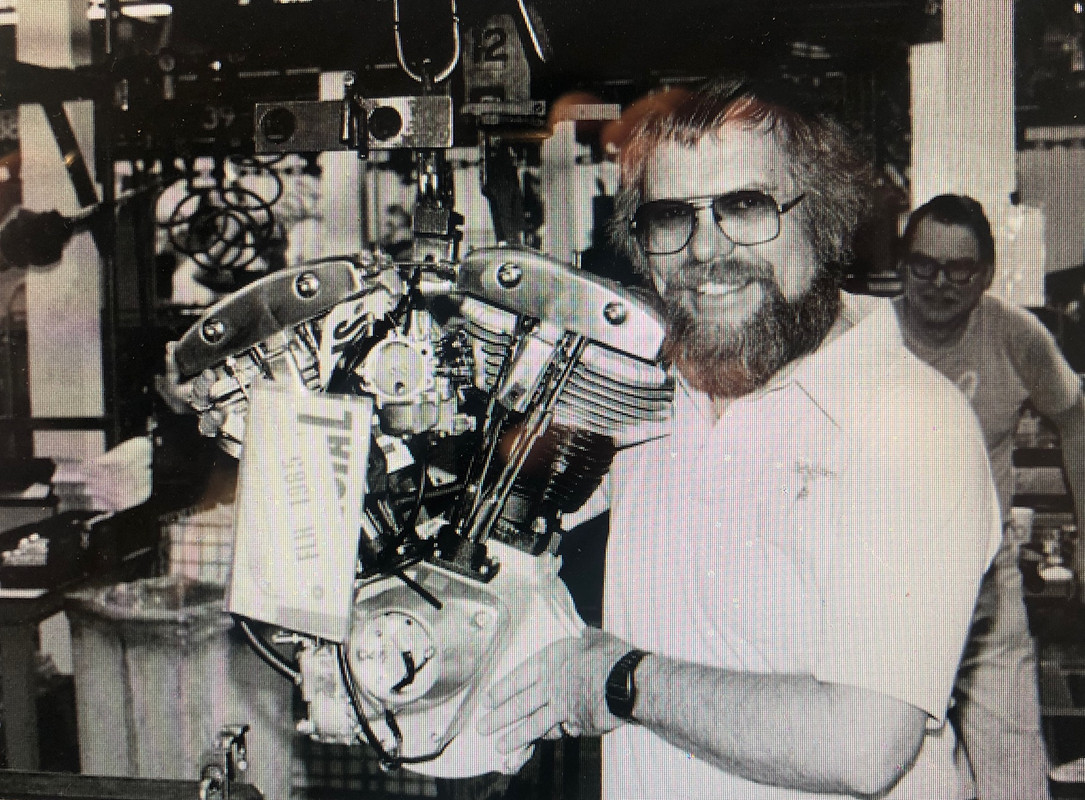 Joined Nov 7, 2011
·
7,867 Posts
Thanks for all that, 'Professor'. I enjoyed the lesson. I had no idea that they were doing so much 'parts bins engineering' that far back. They must have learned that from G.M. I knew when I looked at the pic (before I read what you said) that that smile belonged to Willy G. Have seen him at several different big bike events over many years. Back when the HD Execs all rode and they'd have a frosty or two with the great unwashed to hear what they liked and didn't like about their HDs.

Joined Apr 18, 2010
·
10,359 Posts
I had a 1980 FXWG , sweet indeed .. A buddy has a 85 FLH with the Belt Drive script .. I seen one kick start EVO somewhere .. Back then Harley didnt waste any parts , I remember FLH's on the floor new in the 70's , where you could see the fairings were repainted , as the inside was sometimes a different color or poorly painted over , there was no inner fairing like there is now and the fiberglass finish on the inside was very rough ..